Most who know me would agree I've never been naturally green fingered. When I moved into my house, the garden was full of mature shrubs that grew like billyo. Visitors would point and say things like "Your agapanthus looks good." Not a euphemism, it seems. I'd just shrug, deeming actual gardening for other people, with my activity limited to mowing and pruning and drinking wine in, all of which I carried out with vigour. I gave myself RSI last year after a five hour bout of trimming something climby - clematis, apparently.

But something has crept up on me. For the first time, I'm keen to learn and have been thinking about where to plant new things. I started a journal (!) and found myself watching - my sister nearly fainted when I told her - Gardener's World. (As I'm in full disclosure mode, I should report I also recorded it when I was out.)

Mum will be chuckling. Each Sunday afternoon she'd drag her teenager to the garden centre. I'd shuffle along kicking stones and shoulder sloping while she gave a running commentary. I wish I'd listened. When she was bed ridden, she was still ordering plants that never made it out of their pots. I inherited a newly bought camellia and small apple tree, and feel the huge burden of responsibility not to inadvertently kill them.

So my elderly friend and I went to a garden centre last week (with my own kids unimpressed at my observation on the circle of life) and while she pointed and offered advice, this time I listened, and quietly assessed what I like (magnolia, camellia, hydrangea and roses) and don't like (succulents, variegated leaves anything spiky). The following day she gave me two packets of sweet pea seeds that require soaking and putting into trays. Which blew my mind slightly. I mean, that's practically like producing a test tube baby. 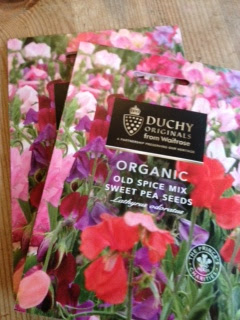 Anyway, I've begun pulling up dead stuff and digging over the border in readiness for the makeover. It's not without trauma. When a worm the size of my middle finger started crawling towards my glove, I screamed and did a version of a rain dance. "Is it a grass snake?" came a concerned voice over the fence.

My long suffering friends are being pumped for advice but as Frank said, "I'll do it my way." When I mused that I planned to throw grass seed onto a patch of sloping earth, another friend looked incredulous. "You've got to level it", he said. Hmm.... we'll see. Teletubbie bumps might fit in quite nicely.

Have your cake and eat it

When DD2 announced she wanted to bake a Sunday afternoon sponge on the weekend I gave up sugar forever, a small anguished cry escaped my lips. Then I had a flash of inspiration: I remembered seeing a cake in a mug recipe so I set out to hunt it down. Turns out there are millions of them, but I used this one. (Incidentally, this is a student website which had other nuggets of usefulness including budget meals, how not to get too drunk on a night out and instructions to make a googly eyed ghost out of a tampon.)

DD2 magnanimously selected my least favourite cake in the world (chocolate, bizarrely) used a tablespoon to measure all the ingredients straight into the mug and after a bit of jostling over the stirring - by this point we all wanted a piece of the action - shoved it in the microwave. 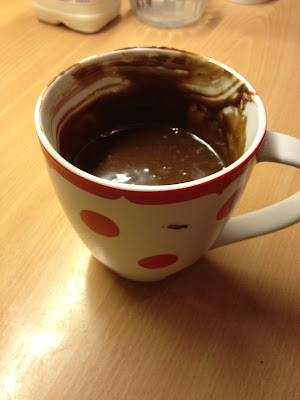 It was miraculous. It rose up out of the cup majestically. 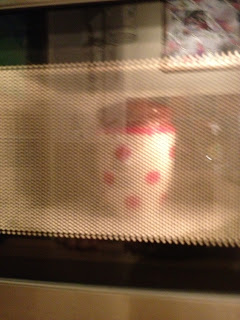 Then dropped a little. 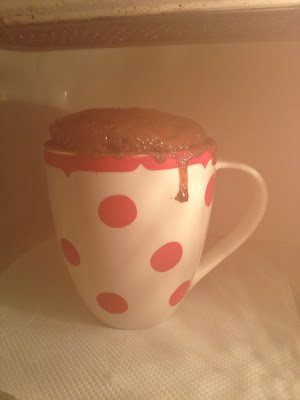 DD1 said it looked like a lipstick popping up of the tube, but it reminded me of Ralph's little fella when he gets excited. This is Ralph unexcited. 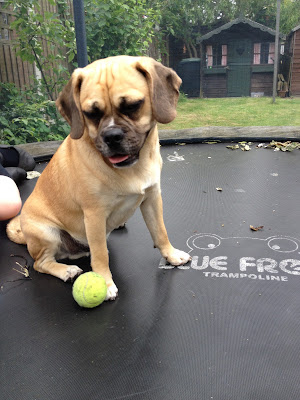 Then after a scant three minutes it passed the skewer test. 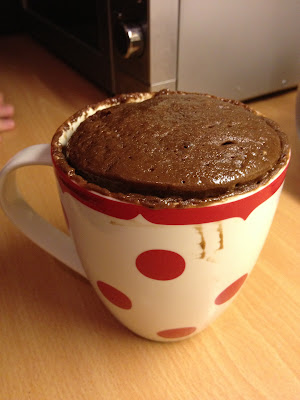 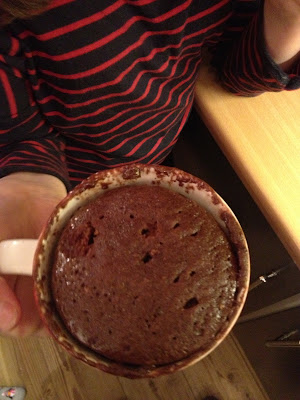 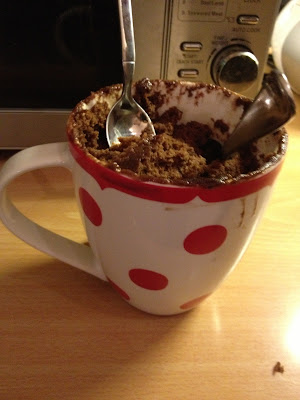 I've seen this referred to online as dangerous and I can see why. I mean, not only is it instant cake, there's virtually no washing up. Thank god this discovery is not going to be a problem for me.
Posted by Paula - ivegotadrill 4 comments:

The watch the fourteen year old asked for for Christmas was losing time by New Year. I contacted the shop online and they're sending an immediate replacement. DD1's response? "Oh, that's good. I mean, I'm not worried about all that time-telling shizzle, I've got my phone for that, but I suppose it's better if it works." 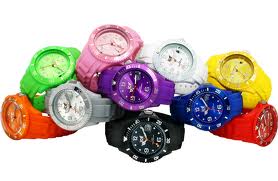 My sister called from Wales to say our Christmas presents were en-route to arrive the following morning. As I had to go out, I asked my pensioner neighbours if they would take it in for me. They said no problem, they'd be home.

Half an hour later, as I drove along enjoying the bright winter sunshine, my sister's voice from the previous night's conversation suddenly popped into my head. My tarantula collecting sister:

"Ignore the box. It has big stickers that say 'contains live insects' but I think I got them all out."

In the past three days I have had out-loud conversations with the following:

I have a favourite type of pen. Let me rephrase: I cannot work unless I have a drawer full of my babies, along with yellow lined A4 pads. The pen was scratchy. I said "You're a bit rubbish today, aren't you?" Then I apologised, out-loud, for wearing it out. The sewing machine was holding hostage the needle I was trying to replace. I was so engrossed in negotiations that I didn't hear the doorbell. Fortunately, my visitor helped me fix it, though I noted he didn't talk to it, or make any concession to its demands. As for the cat, she miaowed at me as I made a cup of tea, her chocolate button eyes begging for food. "Hungry girl?" I said. My cat died in the Spring.

Could it be that as a writer I spend so much time in a world of my own creation that when I re-enter the earth's atmosphere, my imagination takes time to acclimatise? Almost certainly. However, I have another theory. Neither the pen, the sewing machine or the deceased cat do any of the following:

1) Play the opening bars of the same song eighteen times whilst working out a dance routine.
2) Scream "I hate you" to the other person you made.
3) Declare "But every single one of my friends is allowed" (only to admit later that just two are).
4) Leave a trail of Shreddies, butter and orange juice from the kitchen to the sofa every morning, without fail.
5) Talk to me at the same time, about different subjects, in a rising pitch until my brain is vibrating, then roll their eyes and flounce off when I ask them to speak slowly and in turn.


Is it any wonder I take refuge in one sided conversations with inanimate or ghostly objects? It's tough being a single parent. The other parent isn't around for a daily download and back up, to throw a different perspective on something, to share the listening. Not that I would swap my girls for anything. In fact, when they are with their dad, I miss them horribly. Fortunately, their presence is still in the house, even when they are not. 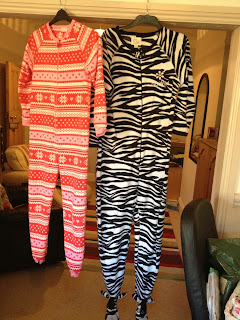 And I'll know I'm in real trouble when I start chatting to these.
Posted by Paula - ivegotadrill 1 comment:

A good friend of mine in her seventies is independent, feisty and highly capable. She owns a mobile phone for emergencies and refers to her computer as 'The Box'. About a month ago, she mentioned she needed something fixed but her odd-job man was busy, so when I bumped into my odd-job bloke the following day, I asked him to call her. He did, and left a written quote.
Yesterday, my friend rang. "My dear, it's time to get that job done. Does J have a home telephone number?" I said that I had no idea as I've always used his mobile.
"Oh. I see" she replied.
"Is there a problem?"
"No, dear, but I don't ring mobile phones. They're far too expensive."
I was about to offer to call or text him for her, but she beat me to a solution.
"Don't worry dear. I have his address on the quote. I'll write to him." 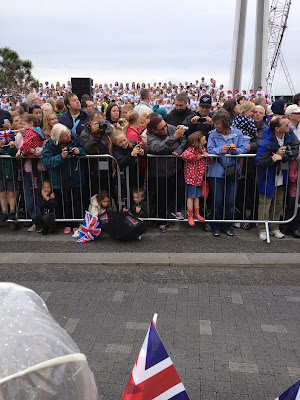 The waterproof mascara worked overtime in July. The Olympic torch came to town and though I feel indifferent to the Olympics, the event was surprisingly emotional. Plus, I could indulge the flag flapping obsession I’ve had since the Royal Wedding. With Union Jack in  hand, I was immersed (literally, as it happens - it piddled down) in the atmosphere on the seafront. DD2 was in a 2,000 strong choir singing a hauntingly beautiful Anthem, and like thousands of others, I was poised to capture the moment the torch passed: on tiptoes, phone angled in the air. As the excitement built it dawned on me I would have approximately one second to capture a running flame and was more likely to photograph the back of someone’s hood. I put the phone in my pocket and trusted my memory. Then last week, DD2 had her leaver's assembly. Again, the temptation was to capture the whole thing, but other than a couple of pics at the beginning, I watched them sing, dance, body pop, take the mickey out of the teachers and talk about how much they will miss the school. The camera could never had done it justice: many of us were in pieces. None of which I recorded anywhere other than in my head. 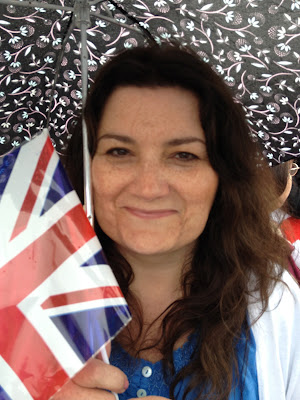 (Above: Flag waving loon with a brolly.)

This 'feeling it' extended to my next novel. Some time ago, I'd come up with a story and several strong characters. My inciting incident and major plot points were all in place and I sounded it out to a couple of friends who sweetly declared it 'fab'. But I was reluctant to start writing. I played with it for a couple of weeks but something wasn't working. I tried to turn it into something I wanted to write, but after one sleepless night I realised the problem: I wasn't feeling it. So I archived it, confused and fearful that maybe I didn't have it in me after all to write a second book.  Then one evening last week as I peeled carrots (the glamour… the excitement…) the seed of a story jumped into my head. I rushed to the keyboard, and my fingers couldn't keep up with my thoughts. Dinner was late but I have the outline of a story I do want to tell. One I want to spend every waking hour with. I have the house to myself next week and I plan pyjama-clad, wild-haired, phone-ignoring writing until I get the full shape of my new love. And I'm more than excited at that prospect.

For now, the sun is out, the sky is uninterrupted blue and I'm going to go and dip my toes in the paddling pool. Because I’m feeling something else this week for the first time in ages: Too bloody hot. 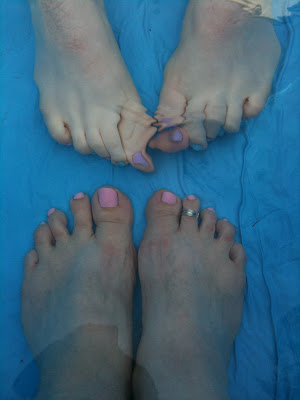 PS. The torch took a lunch break and came past again an hour later when most of the people had dispersed. It would have been rude not to take a couple of photos then.  :-) 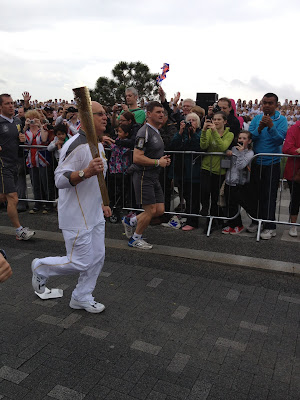 Paula - ivegotadrill
I'm a freelance writer, former account director and trained clinical hypnotherapist. I live with my two gorgeous, noisy children and I never run out of tea bags or cold wine.